Computer networks are used to share the data, information, and resources with a specific medium. It allows for distributing the information and increased the communication resource.  Computer networks provide the services to the large organization and as well as an individual common man. It can be used as single business building blocks other than used as LAN, WAN, and MAN. 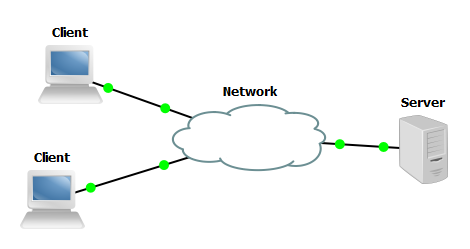 Before starting to look at the official matters in detail, it is worth allocating some time to indicating out why people are interested in computer networks and what they can be used for. After all, if nobody were interested in computer networks, few of them would be built. Starting with the traditional uses at corporations and for individuals and then move on to contemporary enhancements as regards mobile users and home networking.

The basic four uses of computer networks which are as follows:

Many organizations and companies have a substantial number of computer systems. The business application is key management, management may have decided to connect them to be able to extract and correlate information about the entire organization. In the business application, the main objective is resource sharing and the aim is to make all programs, equipment, and especially data available to anyone on the network without regard to the physical location of the resource and the user. An obvious and well-known example is having a group of office workers shares a common printer.

In the simplest of terms, one can imagine a company’s information system as being made up of one or more databases and some number of employees who need to access them remotely. In this model, there are three components of this model.

The employees have simpler machines, called clients, on their desks, with which they access remote data. The data are stored on powerful computers called servers. The two or more computers or clients are connected to each-other for resource sharing and information.

This entire procedure is called the client-server model. It is applicable when the client and server are both in the same building, but also when they are far apart.

A computer network can be responsible for a powerful communication channel among employees. Almost every single company that has two or more computers now has e-mail (electronic mail), which employees normally use for a great deal of daily communication.

Many other organizations and companies are exploiting business electronically with other organizations or companies, especially suppliers and customers. The main aspect of the above procedures that are starting to become more important is doing business with consumers over the internet. Thus, many companies provide catalogs of their goods and service online to take orders. This sector is expected to grow quickly in the future. It is called e-commerce (electronic commerce).

In the home network, a single computer user can interconnect with multiple computers system so that everyone can sharing files, printers, programs, many other peripheral devices, and internet access with other computers, reducing the need for redundant equipment and, in general, making easier to use.

Some of the most popular uses of the internet for home users are as follows:

Access to remote information has come in many forms. It can be surfing the world wide web for information or just for fun. The information available includes the arts, business, government, cooking, health, hobbies, sports, recreation, science, travel, newspapers, history, and many other forms. Many newspapers have gone online and can be personalized and also called an online digital library. Many professional organizations, such as the ACM and the IEE computer society, already have many journals and conference proceedings online.

All of the above applications involve interactions between a person and a remote database full of information.

The succeeding wide category of network use is person-to-person communication, basically the 21st century’s answer to the 19th century’s telephone. E-mail is even now used daily by zillions of people all over the world and its use is growing speedily. It already routinely contains audio and video as well as text and pictures. The smell may take a while. Any teenager worth his or her salt is addicted to instant messaging.

Another type of person-to-person communication often called peer-to-peer communication, to differentiate it from the client-server model. In the form, individuals who form a loose group can communicate with others in the group, as shown in the below figure. Every person can, in principle, communicate with one or more people; there is no fixed division into clients and servers. 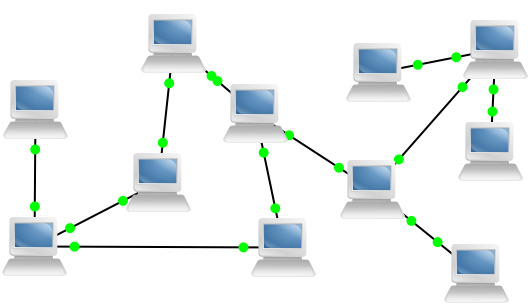 However, the next generation of peer-to-peer systems excludes the central database by having each user maintain his database locally, as well as providing a list of other nearby people who are members of the system. A new user can then go to any existing member to see what he has and get a list of other members to examine for more music and more names. This lookup process can be repeated indefinitely to build up a large local database of what is out there. It is an activity that would get tedious for people but is one at which computers excel.