When the antenna is connected to an electrical circuit of a computer or wireless device, it converts the digital data into wireless signals and propagates in its frequency range. The receiver at the other end receives these signals and converts them back to digital data.

A small part of the electromagnetic spectrum can be used for wireless transmission.

As the electrons move, they create electromagnetic waves that can propagate in space (even in a vacuum). These waves were predicted by the British physicist James Clerk Maxwell in 1865 and were first discovered by the German physicist Heinrich Hertz in 1887. The number of oscillations per second of a wave is called its frequency f and is measured in Hz (in honor of Heinrich Hertz). The distance between two consecutive (or minimum) maxima is called the wavelength, universally designated by the Greek letter λ (lambda).

They concentrate their signals in this narrow band to effectively use the spectrum and to obtain reasonable transmission rates for transmission with sufficient power. However, in some cases, a wider band with three options is used.

In the spectrum of extended frequency hopping, the transmitter moves from frequency to frequency hundreds of times per second. It is popular for military communications because it makes the transmission difficult to detect and almost impossible to block.

The second spread-spectrum form, the spread spectrum of the direct sequence, uses a code sequence to spread the data signal over a wider frequency band. It is widely used for commercial purposes as a spectrally effective form, allowing multiple signals to share the same frequency band. These signals can receive different codes, a method called CDMA (Code Division Multiple Access).

The third way to communicate with a wider band is the UWB (Ultra Wideband) communication. UWB sends a series of fast pulses by changing its position to transmit information. Fast transitions lead to a signal that propagates in a very wide frequency band. UWB is defined as a signal having a bandwidth of at least 500 MHz or at least 20% of the center frequency of its frequency band.

Radio Frequency (RF) waves are easily generated, can travel long distances and can easily enter buildings. They are therefore widely used for indoor and outdoor communications. Radio waves are also omnidirectional, which means that they propagate in all directions from the source so that the transmitter and receiver do not need to be physically aligned carefully.

The properties of radio waves depending on the frequency. At low frequencies, radio waves cross obstacles well, but the power drops sharply with the distance between the source and at least 1/r2 in the air because the signal energy is distributed more subtly over a larger area. This attenuation is called path loss.

At high frequencies, radio waves tend to move in a straight line and bounce off obstacles. Losses on the highway further reduce power, although the signal received may also be largely dependent on reflections. High-frequency radio waves are also absorbed by rain and other obstacles to a greater extent than low-frequency ones. At all frequencies, radio waves are subject to interference from motors and other electrical equipment.

Microwaves propagate in a straight line. Microwave communications are so widely used for long-distance telephone communications, mobile phones, television distribution, and other purposes that there is a serious spectrum shortage. It has several key advantages over fiber. The bottom line is that you do not need to lay cables. By buying a small lot every 50 km and installing a microwave tower, you can completely abandon the phone system.

The microwave is also relatively cheap. Installing two simple pillars (which can be large poles with cables for four people) and installing antennas in each of them can cost less than placing 50 km of fiber in an urban area or congested mountain, and it can also be cheaper to rent fiber from the phone companies, especially if the phone company had not fully paid for the copper it had extracted when it had placed the fiber.

Non-controlled infrared waves are widely used for short-range communications. Remote controls used for TVs, VCRs and audio equipment use infrared communications. They are relatively directional, inexpensive and easy to assemble, but they have a major disadvantage: they do not cross solid objects. (Try to stand between the remote and the TV and see if it still works.)

On the other hand, the fact that infrared waves do not cross solid walls is also an advantage. This means that an infrared system in a room of a building will not interfere with a similar system in adjacent rooms or buildings: it can’t control the television of its neighbor using the remote control.

The highest electromagnetic spectrum that can be used to transmit data is light or optical signaling. This is done with a laser. Because of the frequency with which light is used, it tends to move strictly in a straight line. Therefore, the sender and the recipient must be in line of sight. The transmission of the laser being unidirectional, it is necessary to install a laser and a photodetector at both ends of the connection. As a general rule, the laser beam has a width of 1 mm. A specific job is to align two remote receivers, each directed to a laser source.

The laser works as a Tx (emitter) and the photodetectors as an Rx (receiver). Lasers can’t penetrate obstacles such as walls, rain, and thick fog. Besides, the laser beam is deformed by wind, atmospheric temperature or trajectory temperature changes. The laser is safe for data transmission because it is very difficult to use a 1mm wide laser without interrupting the communication channel. 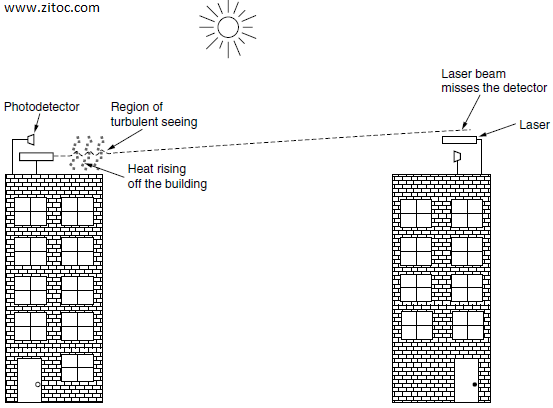 Structure Of The Telephone System

We are a team of writers, researchers, and editors who are passionate about helping others live their best lives. We believe that life is a beautiful gift. We try to live our lives to the fullest and enjoy every moment. We are always learning and growing, and we cherish the relationships we have with our family and friends.

Translate in your language